Did you know that most food that is fed to dogs today has extremely low nutritional content? If you feed your dog commercial dog food, you may be slowly killing your dog.

Perhaps you think this is a little dramatic? Is not if you the nutritional content of commercial dog foods.

Think again. If humans are fed a diet of unhealthy foods, they probably won’t show any adverse signs for quite some time.

But fed over many years, people will become sluggish, sick, and eventually die from degenerative diseases much earlier than they would otherwise pass from this life. 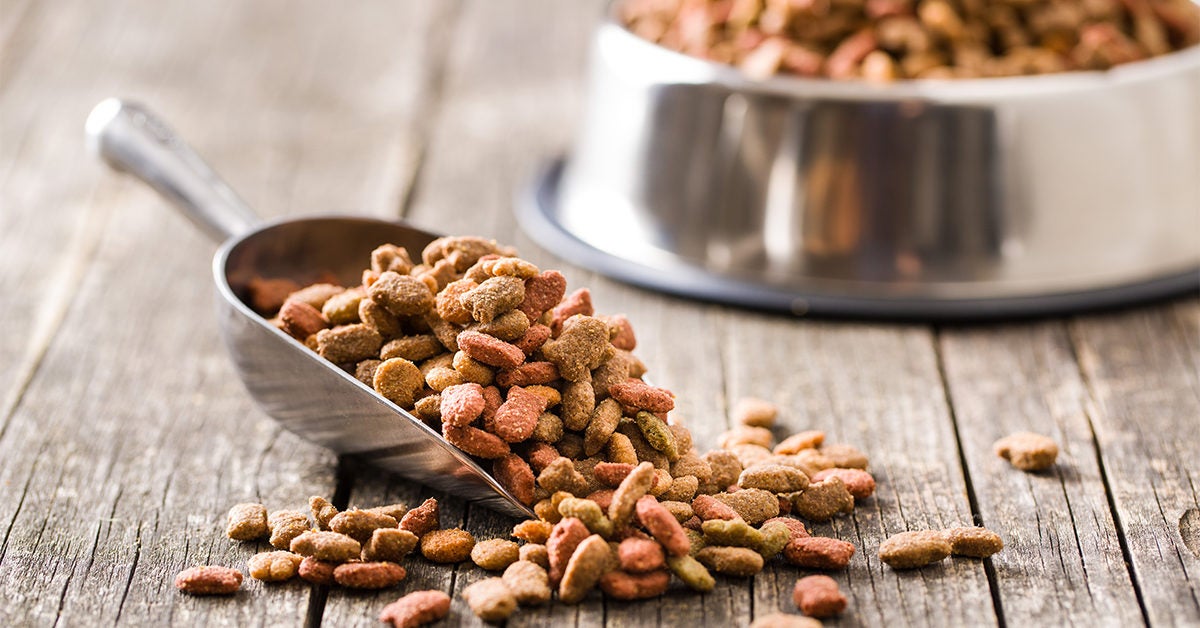 The same goes for dogs.

All commercial dog food that is extruded (cooked) at very high temperatures cannot be anything but bad for our dogs, whose natural diet in the wild is mainly fresh, raw meat.

Even after dogs became domesticated, and then kept as pets, for decades they were fed home-cooked food and table scraps, before anyone thought of commercializing dog food and selling cans of mush, or pieces of highly questionable biscuit-looking food called “kibble”.

Dogs used to live longer than they do now.

Examine baked and kibbled foods for the presence of burned spots on the biscuits.

The presence of large numbers of burned biscuits indicates that the food has been cooked at such high temperatures that the nutrients are likely to be almost non-existent. ( nccdf )

On the other hand, if dry products are damp, soft, or stale, it means that they have been improperly processed, become damp in transit, become damp during storage, or are old.

Dry products that become damp quickly deteriorate from the action of mold and eventually bacteria. Sometimes the only indication that mold is beginning to attack a dry food is the musty odor smelled when a bag is opened.

At other times it may be seen as a white, hairy beard or a bluish-green or black velvety coating over the food. Any food found to be moldy should be destroyed immediately and never fed to dogs.

Does any of this sound like food you would eat yourself???

If not, then even though it’s labeled as “dog food” and could possibly have some form of nutritional content (if you’re lucky), why feed such substandard rubbish to your dog? It really can be harmful over the long term.

Why else do you think so many dogs suffer from degenerative diseases like heart disease, cancer, kidney failure, and more? These diseases were previously unknown in companion animals. Now they’re commonplace.

And the increase in the incidence of these degenerative diseases in dogs and other animals has occurred in direct proportion to the practice of giving pets raw food or table scraps, to giving them commercial pet food.

Feed your dog a raw, or primarily raw, fresh food diet. A large part of the food should, of course, be meat.

If you’re not a fan of raw food, then by all means give your dog home-cooked food, made from premium ingredients which you would use for your own food.

Of course, you can give your dog all the fat and offcuts from the meat that you don’t want. Dogs need some fat (unlike us!)

And if you really need the convenience of pre-prepared dog food, then go for top-quality dog food – NOT one of the commercial brands found on your supermarket, or even pet store shelves.

Even many vets have no idea about correct animal nutrition, believe it or not, and promote commercial dog foods that are peddled to them as “premium” food when they’re nothing of the kind.

How do you know what a superior quality dog food is? Check for both the ingredients and the method of cooking.

The ingredients should be primarily meat – not meat byproducts, a small proportion only of grains of all types, and preferably some fresh vegetables, fruit, or herbs.

As for the cooking method – the lower the heat, the better. Don’t go for anything that has been extruded (which is most kibble), or canned at high temperatures.

If the method of cooking is not stated, then make further inquiries of the manufacturer, or go for one that does state the cooking method – freeze-dried or baked are acceptable.

Just How Good Is Nutritional Content of Commercial Dog Foods

What Is Commercial Dog Food

If you own a dog, you may already know that what is in commercial dog food and what is pet food are two very different things.

Many people do not realize this but what is in commercial dog food actually, is made to be very appealing to dogs! It is filled with everything that your dog loves to eat such as beef, cheese, chicken, and even corn.

Dogs do not make any logical decision when choosing their food so the manufacturers of commercial dog food take great lengths to ensure that your dog will love what they are eating.

So what is in commercial dog food and what is pet food? Well, these terms have been lumped together since the early part of the 1900’s.

Pet food on the other hand is just food for animals. The main difference between the two is that pet food will be free from any preservatives that are found in commercial dog food.

Commercial pet food also uses inferior ingredients such as low-grade meat, which is unhealthy for dogs.

However, some people disagree and claim that what is in commercial dog food is simply dog food that has been enriched and processed so that it can be sold as pet food.

Whatever you decide you should always check the ingredients list to make sure that what you are giving your dog is what it says it is.

You should also read the list of ingredients very carefully so that you are aware of anything that may be potentially harmful to your dog.

Now some people argue that commercial dog food is not bad for their dog because it contains vitamins, minerals, and protein.

In fact, this is true but what is in commercial dog food is filled with chemicals such as sodium benzoate and dyes which are harmful to your dog. Sodium benzoate can cause kidney damage and much worse skin irritation.

Dyes are only used as a temporary dye and are quickly removed from the food but remain in the meat which means that your dog is getting everything he or she needs but none of the nutritional value that a raw diet would provide.

Another thing to be careful of is what is in commercial dog food that comes from a puppy mill. These places are absolutely atrocious and have a terrible business practice.

Puppy mills are like holding facilities where puppies are treated worse than animals. They are usually chain smokers, beatings, and humiliated. It’s absolutely shocking to see how this type of treatment is meted out.

What is commercial dog food that is sold by mail order and is available in grocery stores? Again this is another shady operation that puts dogs and consumers at risk.

They may have decent ingredients, but the packaging and the marketing are simply dishonest. The company may state that their feed contains what is recommended for a dog’s diet.

However, what they don’t say is that the feed is made up almost entirely of inferior quality ingredients that are not only unsafe for humans but harmful to your dog.

Did you enjoy reading the nutritional content of commercial dog foods? Please share it on your social media pages.